Rug Designers at age 8, who would have knew?

Yes, even at the tender age of eight humans are designers. This came to me as my art camp students became fully absorbed during the design phase of our weaving class.

I gave each student a circular design sheet after a brief discussion about color wheel basics. Each and every student was fully engaged during the discussion and it was easy to see that this was going to be the most rewarding part of our weaving class. The designs emerged one by one as the students considered the colors of materials in each of their own supply piles.  Most of them had the concept of the spiral design because they had completed the practice piece on a small scale using the embroidery hoops. These new designs would be done on a larger scale using a hula hoop loom, so they all became very serious about how they wanted their projects to turn out.

Two students who were spending summer vacation together came up with the idea of crafting ‘Friendship Rugs’. They would each do a rug of their own in one design of a rainbow collage of colors in a spiral format, placing one single color in the complete row alternating white or tan in between each rainbow color as they went. The design was drawn in great detail, but they did not return to class on Friday. I didn’t get a photo of their projects.

Another student, who was quite attached to her six cats, wanted to make a rug for her tree house. And since all her materials were dark earth tones, it seemed she had put some thought into that design. She often referred back to her design as she worked on it in a very methodical pace, checking and double checking her pattern of ‘under/over’ and asking me to check her work periodically. Her parents came to our Show and Tell event on Friday and were quite delighted with the project results. Here’s a picture of her work.

One of the students warmed my heart by bringing all old t-shirts from her own closet and dresser drawers. Her rug was a beautiful lavender, blue, and green rug. Her design took all of her materials into consideration, and she used up most of her materials during class. She enjoyed the class and worked quietly without much help becoming quite the expert at weaving in the round.

Most students chose a two tone color scheme using two complimentary colors from the color wheel that they also had in their material stash.  The design sheets reflected those patterns of alternating the two colors. Their projects pretty much followed their design sheets with occasionally adding a third color to the design as they ran out of certain colors. Here is one of those projects completed by Lola.

One student, who had missed the first day of class and had not yet made her practice piece, designed her rug into wedge shapes of color. I knew that this would be a difficult design to accomplish as it would entail changing the weft threads more often than the other projects would need. She decided on alternating the warp into black and white and then alternating the weft colors in the design choices of her wedge pattern.  Here is Hannah’s two tone rug.

Overall, Art Camp was a huge success for the Green Craft Studio.  I will be happy to do that camp all over again next summer if they call me in as a return instructor.

Have a happy summer all you arts and craft campers! 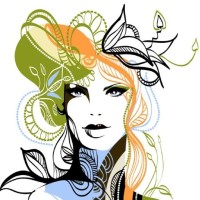 The world of ETSY by the ETSY TEAMS FELLOWSHIP SOCIETY

Crafting Green in the Studio

The Art and Craft of Blogging

The latest news on WordPress.com and the WordPress community.